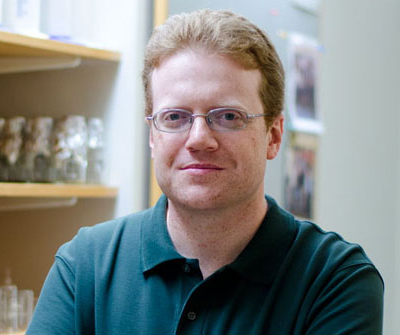 Dr. Dudley Lamming, PhD, focuses his research on the regulation of metabolic health and aging through diet. He wants to find new ways to promote health and longevity and has used novel translational methods with both mouse and human models to do so. His laboratory discovered that low protein diets promote metabolic health—improving blood sugar control and reducing fat storage—in humans and mice. Dr. Lamming has been an avid supporter of the Survey of the Health of Wisconsin (SHOW) in his translational health research. He turns to SHOW to complete groundbreaking translational research that connects findings from mouse models to humans in a cost-effective and time-efficient way.

“Without SHOW, I don’t think there would have been a way to complete this research, certainly not in a reasonable amount of time. By using SHOW, we have access to studies that took many years to complete, and we not only got access to this data, but also the skilled people at SHOW who helped us analyze it.”

Dr. Lamming is a faculty member of the Division of Endocrinology, Diabetes, and Metabolism within the Department of Medicine at UW-Madison. He is a fellow of the American Aging Association and the Gerontological Society of America; a recipient of the Gerontological Society of America Nathan Shock New Investigator Award and the American Physiological Society (Endocrinology and Metabolism Section) New Investigator Award. He also participates as an editorial board member of several peer-reviewed scientific journals.

Lamming says he initially found SHOW in 2018. “I had been looking around and saw that Kristen Malecki, who was leading SHOW at the time, had published data from SHOW, and I realized SHOW might be able to support some of the work we wanted to do. I thought it would be useful to see if there was a translational component to our work, and I knew from hearing about SHOW that they had done a lot of surveys looking at not only medical histories but also dietary information.”

From Lamming’s most recent publication, The regulation of metabolic health by dietary histidine in mice, some key findings were that, in mice, low protein diets, specifically low in histidine, promote leanness and increased energy expenditure. Using SHOW data, Lamming and his team were able to demonstrate an association between how much histidine is in the diet and body mass index. He said, “it seems like heavier humans tend to be eating more histidine, based on dietary histories that SHOW collected and data about weight and height associated with the subject.”

Lamming says, in the past, “we completed a similar study”, The adverse metabolic effects of branched-chain amino acids are mediated by isoleucine and valine was published last year, “looking at dietary isoleucine with SHOW and found an association there as well. Although it seems like the dietary association might actually be stronger with histidine.”

Lamming says he will continue to use SHOW, “one of the things we want to do going forward is to look at other parts of metabolic health, such as liver enzymes and liver health, as well as blood, triglyceride, and lipid levels, and see how those associate with diet. It will definitely be useful in the future to use the SHOW biobank again.” He says in the past, his team has been able to use SHOW biosamples to investigate potential hypotheses as well.

Starting soon, Lamming says, “we’re also planning to use SHOW biospecimens as controls for an upcoming clinical trial where we’re going to look at the effect of a pharmaceutical on health outcomes.”

Lamming is and will continue to be a huge supporter of SHOW. He says, “I’ve told people about this diet study and the availability of biospecimens and, overall, SHOW’s been really fantastic to work with. SHOW has been really useful to us, and it’s a terrific resource on campus I’m glad to have been able to use it in our work.”

“I love working with SHOW and definitely recommended it.”

Want to learn how you can use SHOW to make your next project faster and easier?
Click the button below to request a free 30-minute consultation!
Submit a Consultation or Data Request