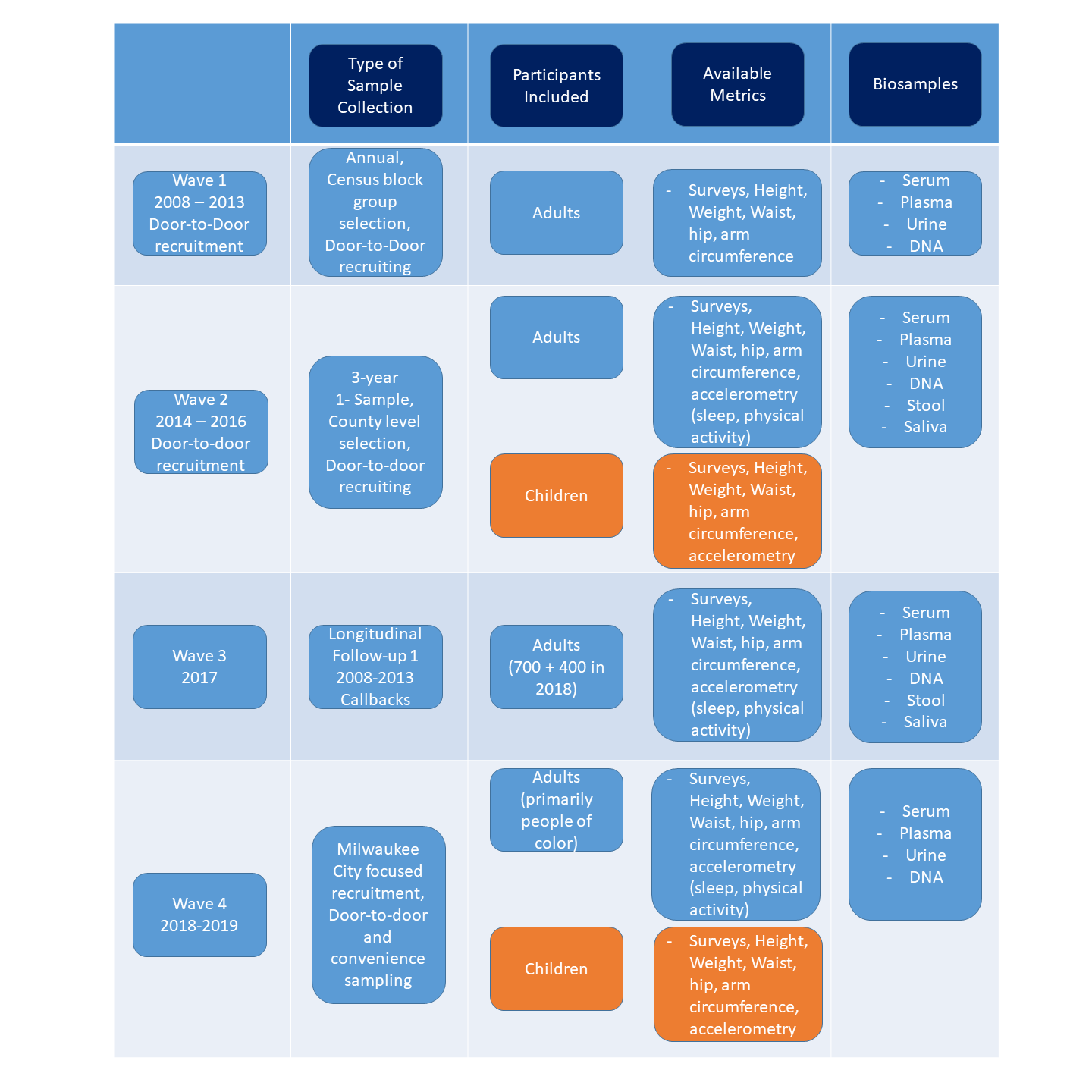 Individuals living in the selected households receive an advanced mailing to describe the project and trained field staff make visits to screen, enumerate and recruit individuals in the household. Starting in 2019, individuals can also voluntarily provide contact information at community-based events. These individuals are screened as well before invited to participate.Informed-consent is completed at the scheduled, in-home return visit.

SHOW has recruited over 6,000 residents to participate to-date.

Note: Of the eleven Native American tribes in Wisconsin, only the Menominee Tribe has granted permission for the survey to be conducted on their land. As a result, all of the residences on tribal land, with the exception of the Menominee Reservation, have so far been excluded from SHOW sampling frames.

Surveys were completed among adults 21-74 years of age.

For the next 3 years, 2014-16, a three-stage sampling approach was taken, adding county, stratified by mortality as the first-stage of the approach. Milwaukee and Dane counties were selected with certainty due to their large size relative to the other 70 counties; 10 counties in total were selected for visits (in 11 stands) over a three-year period.

Surveys were completed among persons of all ages, including children and adults.

In 2017, a longitudinal sample of adults was identified among prior 2008-13 SHOW cohort members. Children living in these households were also invited to participate in the survey.

To focus on collecting survey information from underrepresented groups, SHOW revised their recruitment methods to include convenience sampling at community events. Staff provided potential participants information about all survey components, as well as address any questions regarding the process. Those interested could voluntarily fill out a contact sheet to be screened via telephone at a later time. Once determined to qualify for the study, staff scheduled the in-home visit and sample collection appointment.

Beginning in 2014, children were included in the SHOW sample. To-date, over 700 children zero to 17 years of age have participated in the survey.

Parents or guardians are asked questions about their child’s health and functioning and respiratory health. They also answer questions for children under 12 years of age on physical activity, screen time, diet and sleep. Children 12-17 years old are asked these questions directly.

Physical measurements include height, weight, waist and hip measures for children three years and older. Blood pressure, lung function and accelerometry are performed with children six to 17 years of age.